We deliver a complete ballast treatment
ystem, tailored to fit your needs and availble
space. A skid based solution is also available.
Read more about our components below. 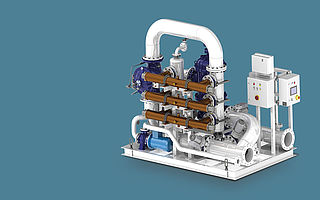 We deliver a complete ballast treatment
ystem, tailored to fit your needs and availble
space. A skid based solution is also available.
Read more about our components below.

Falling foul of the market?

Environmental compliance in areas such as ballast water treatment will be a rite of passage in the future shipping market and a key differentiator in winning charter contracts. But are ship operators ready for the shift?

The clock is ticking towards a 2024 deadline by which all ships will be required to have a ballast water management plan that complies with an IMO convention to curb the release of harmful invasive species from ballast water discharges into the sea.

Biofouling of the world’s oceans is caused by harmful aquatic organisms that accumulate on ships’ hulls or in ballast tanks and threaten marine biodiversity when released from vessels into new environments.

This has become a growing problem as ship traffic has increased in line with a rise in global trade, of which about 90% is now transported by sea, with an estimated 10 billion tonnes of ballast water carried by vessels each year.

“Clearly, there will be no place to hide for ship operators that fail to meet the IMO requirement for ballast water treatment (BWT) and they could risk their vessels being sidelined in favour of compliant players,” says Leiv Kallestad, chief executive of Norwegian BWT specialist Optimarin.

Unpredictability
The IMO convention requires all ships to implement a ballast water management plan and keep a record book to ensure water quality meets the so-called D2 standard that specifies the amount of viable organisms that can be discharged.

However, Kallestad warns many operators still do not have effective ballast water management plans to meet the constant monitoring and testing requirements dictated by the standard, even though they may have installed ballast water treatment systems like those supplied by Optimarin.

“There still remains a lot of unpredictability for ship managers as they do not have effective tools in place to ensure water quality meets the given standard in any port location,” he explains.

“Many are still reliant on constant manual checks of ballast water tanks that are time-consuming and subject to uncertainty, which could prove costly in the form of port delays due to non-compliance.”

He points out that nothing can be left to chance with water quality given reporting requirements and physical inspections under the new regime that can affect the efficiency of ship operations, making the flow of world trade dependent on the flow of ballast water at ports.

“Conversely, those that take onboard new technology to upgrade their BWT systems now will be the winners in the future,” Kallestad says.

Your browser is deprecated.

In order to view this website correctly, please upgrade your browser using the links below.